A blend of humor, creativity, imagination and media

Joanie Wolter was born and raised in Southern California. She grew up in the city of Downey, then college at the University of California at Santa Barbara where she majored in Sociology. She continued her education at Long Beach State and received a teaching credential in elementary education, and later a credential to teach math. Her teaching career lasted 37 years, and she spent most of that time working with “at risk” students in alternative educational settings.

Joanie took several mosaic classes in Long Beach, where she and Charlie lived, fell in love with the process, and after working with very needy students all day long, found that going out to her workshop was a welcome respite, and offered her a sense of solitude.

She discovered the Art Center shortly after their move to Sedona, and took many classes before finding that ceramics was her favorite medium. After learning to create with paper clay and because of her appreciation of the beauty of the outdoors, particularly flowers, she began making them from paper clay to embellish her hand built ceramics.

Joanie took another artistic turn a few years later. After taking a fiber clay sculpting workshop, she found a new passion – sculpting. The whimsical pieces she creates are who she is – a little goofy and fun loving. These sculptures are made from a type of clay that gives them durability and sturdiness. Most of her “senior series” pieces are modeled after her – full figured, middle aged women ready to live life to its fullest. Joanie’s Big Ass Raven sculpture received the People’s Choice Award at the 2009 Sedona Arts Center’s Members Show. She also received “Best of Show” for a roadrunner piece called Fast food at the 2012 Coconino County Fair. In 2013, she won an Honorable Mention for a Roadrunner piece at the California Sculpting Symposium. Most recently, her piece called “The Crush” won first place in the sculpting category at the Sedona Art Center’s juried show.  Joanie and Charlie recently moved to North Scottsdale and are becoming involved in all that the area has to offer. 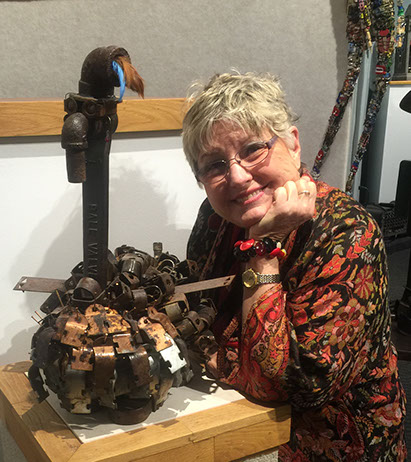 Joanie has been lucky enough to be able to combine her two passions – teaching and fiber clay. She offers classes in her North Scottsdale studio, and has also taught at her old studio in Sedona, the Mountain Artist Guild in Prescott, AZ, CA Sculpting Symposium in Cambria, CA, Arizona Art Supply, and many other places in the Southwest.

Her business is named “Cuvée”, a term used in the wine world to mean “a blend”. Her blend of humor, creativity, and imagination, along with mixed media, create pieces she truly hopes you will enjoy.